Katie here!
I spent a lovely October weekend in Phoenix presenting at the annual NDEO conference.

I presented my own Laban research Exploring Laban Effort Combinations: A Spatial Affinity for Flow. My own conference handout and notes on my website KatieSopociDrake.weebly.com

The conference proceedings will be out on the NDEO website in future.

Check out a video conference-goers dancing MEPC's score during their presentation on the MEPC Facebook page!
Posted by Finding Dance at 7:27 AM No comments:


So for Solo/Solo, each of us are writing down a solo for someone else to perform.  Here's the catch: it had to be composed of  pieces of published books, articles, interviews, or reviews.  A bit of a collage project, but we were taking everything and arranging it to use as a template for someone to create a dance from.


Below is what Barbara has written for her long-distance dance partner Eliza.  Imagine what you think it might look like.  If you like, try it out and send it to us. Or just give me some thoughts. I'll pass them on to the dancer and they might end up on stage!


This is a book review by Kathleen Norris for the New York Times about the book “My Bright Abyss” by Christian Wiman, converted into a dance review. Parts have been changed, rearranged, and eliminated.

[This dance] mounts a welcome, insightful and bracing assault on both the complacent pieties of many Christians and the thoughtless bigotry of intellectuals who regard Christian faith as suitable only for idiots or fools. It poses faith as a movement experiment – with novelty and depth.

Wiman has endured dull sermons from liberal pastors who seem embarrassed to mention Jesus, and he has heard from secular fundamentalists who attempt to dismiss his faith with facile reference to psychology. He comments: “To admit that there may be some psychological need informing your return to faith does not preclude or diminish the spiritual imperative, any more than acknowledging the chemical aspects of sexual attraction lessens the mystery of enduring human love.”


Like many artists, after shedding his early religious faith, he transferred “that entire searching intensity” into his work. But eventually Wiman sensed that all those hours of reading, thinking [moving], and writing were leading him back into faith. He began to feel that “human imagination is not simply our means of reaching out to God but God’s means of manifesting himself to us...”

“...because I can feel God only through physical existence, can feel his love only in the love of other people.” His love for his wife and children, he realizes, is both human and entirely sacred. And here the poet comes to the fore, insisting on the right to embrace contradiction without shame. “I believe in absolute truth and absolute contingency, at the same time. And I believe that Christ is the seam soldering together these wholes that our half vision — and our entire clock-bound, logic-locked way of life — shapes as polarities.”


Wiman finds that the integrity of a poem, which is “its own code to its own absolute and irreducible clarity,” is similar to that of a God who lives “not outside of reality but in it, of it, though in ways it takes patience and imagination to perceive.” Both require the use of metaphor, “which can flash us past our plodding resistance and habits into strange new truths.” Christ’s repeated use of metaphor and story, Wiman asserts, is an effective way of asking people to “stake their lives on a story, because existence is not a puzzle to be solved but a narrative to be inherited and undergone and transformed person by person.”


And there is the rub, the necessity of a personal commitment to a particular faith, with its own specific language, rituals and traditions. “You can’t really know a religion from the outside,” Wiman writes, and no matter how much you learn about it, it remains “mere information, so long as your own soul is not at risk.”

With so much at risk for him, he takes the plunge. He creates a physical construct for faith, and accepts that the words and symbols of that construct say something true about reality but are also necessarily limited in their scope.

“You can’t spend your whole life questioning whether movement can represent reality,” he writes. “At some point you have to believe that the inadequacies of the moves you use will be transcended by the presence with which you use them.”

This is, above all, a dance experience, and it evokes compassion. “Compassion is someone else’s suffering flaring in your own nerves. “ Compassion and kinesthesia are the same, and they are rooted in faith. It is a testament to the human ability to respond to grace, even at times of great suffering, and to resolve to live and love more fully. 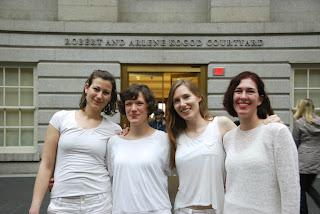 Posted by Finding Dance at 11:48 AM No comments:

Tomorrow premiers the first "public" showing of our latest project Solo/Solo. We're thrilled to be part of the first installment of Portland Dance Wire's Refinery, a work in progress showing for Dance Wire members.http://www.dancewirepdx.org/
Posted by Finding Dance at 12:20 PM No comments:

Hi All,
So for Solo/Solo, each of us are writing down a solo for someone else to perform.  Here's the catch: it had to be composed of  pieces of published books, articles, interviews, or reviews.  A bit of a collage project, but we were taking everything and arranging it to use as a template for someone to create a dance from.

Below is what I wrote for my long-distance dance partner (follow the lettered sources to the bottom links to read where I pulled these quotes from).  Imagine what you think it might look like.  If you like, try it out and send it to us. Or just give me some thoughts. I'll pass them on to the dancer and they might end up on stage!


Rehearsing and performing note:
“a lot of things I bring into rehearsal are half-baked.  I don’t want to finish them because they can be finished by the dancers, or by my working on them in the studio. Sometimes someone makes a mistake, and that brings you somewhere else. You Have to keep that option open.  (A)

Score:
Opening night began with an unintended amuse­bouche: the curtain rose, the music started, the dancers remained motionless, the curtain fell, and there was a smattering of applause. (C)


Part One: “My Animal, Virginia Woolf”

Posted by Finding Dance at 12:55 PM No comments:

Hello Friends!
In this last segment of the Update Series, the members of Mountain Empire share what's to come in the new year:

As the new year approaches, we find Eliza tucked away in her new Portlandia abode, Barbara sussing out the difference between big-city living and little-city living in Blacksburg, Rachel & mended hubby exploring their new house in B-burg, and Katie dance-puttering around our nation's capitol.  In their own little enclaves, the members of MEPC are busy writing a new little project based on what we'd like to see on stage.

Scribbling away (or click-clacking on the keyboard), each collaborator is writing a solo for another dancer filled with outsourced written material.  Perhaps a bit of prose from an Akram Kahn review, a description of a scene from preview of a far-off and unheard-of company, each solo will be constructed out of strange and beautiful bits of material from elsewhere.  What a way to get out of one's own head... or waaaay into it.  MEPC will then reconvene, decide which lucky dancers will get the new solos, and then... stay tuned in for manifestation!  Little bits of this piece will pop up intermittently in each of our communities as we work out the kinks.  Check back with us often or like our FB page for updates on when these will be so you can be a part of the feedback. 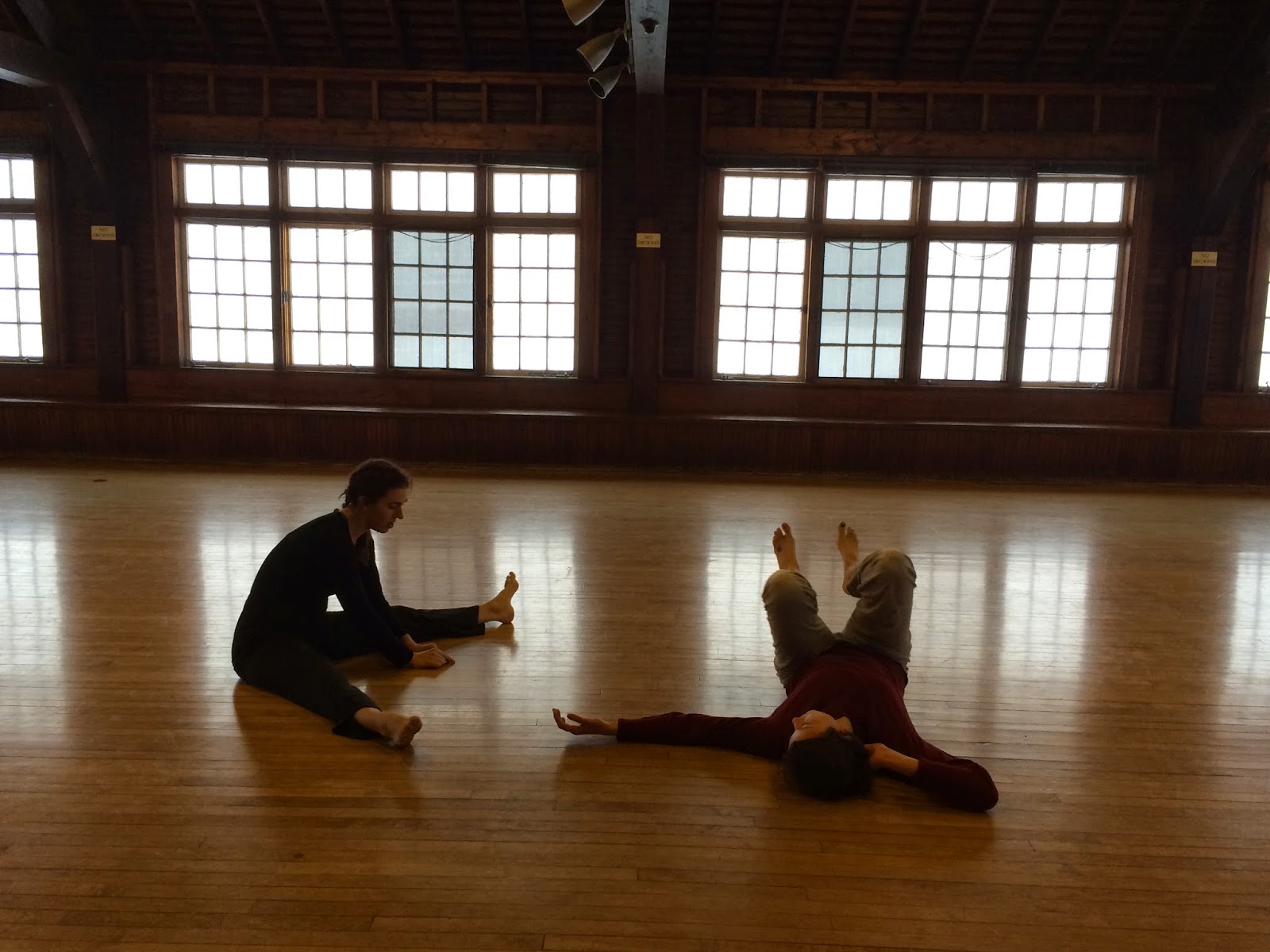 Posted by Finding Dance at 11:46 AM No comments:

Happy Start of December, friends!Since Fall is turning into Winter, for the next few days, each of us will be writing to give you an update on what we have been up to since our summer adventures! Next up is Rachel Rugh!

What has Rachel been up to? Take it away, Rachel:

After an eventful summer and fall, things have finally been settling into a groove down here in the New River Valley.  July was especially action-packed: Barbara and I co-taught several successful dance workshops for kids here in Blacksburg; I got to enjoy upwards of three weeks reunited with Mountain Empire buddies in DC for the Capital Fringe Festival; my husband and I BOUGHT A HOUSE; my husband then promptly broke his leg, which made moving into said house a bit more challenging.  Oh, and I got a new job!  Since August, I've been working as a part-time programming and event coordinator at Virginia Tech's Cranwell International Center.  It's a fun position that allows me to blend my people skills and event production experience, and so far I've been able to sneakily incorporate dance into several events: I called my first square dance at our fall festival, am planning a swing dance for our spring social, and performed a version of Barbara's current MEPC project (Are You Not Your Own) in an international dance concert last month.

Plans for 2015 include: Teaming up with Barbara to teach introductory contact improvisation workshops; co-producing a music/dance collaborative improvisation concert series; kicking my children's creative dance teaching practice into high gear; and starting up a regular open mic in Blacksburg so I can have an excuse to play my banjo more.

Posted by Finding Dance at 6:21 AM No comments:

Happy Impending Turkey Day, friends!Since Fall is turning into Winter, for the next few days, each of us will be writing to give you an update on what we have been up to since our summer adventures! Next up is Katie Sopoci Drake!

What has Katie been up to? Take it away, Katie:

Hey y'all! This summer, after all of the dancing died down, I headed out to Yellowstone N.P. to feast my eyes and spirit on all of the fabulous nature. It gives me life, you know. Little personal projects cropped up here and there and I enjoyed dancing with friends in D.C. and trying on other people's dance-visions for a while.

This Fall has seen me working both in my new position as Executive Assistant at the Maryland Youth Ballet, helping young dancers achieve their dance dreams, and hopping into my well-worn role as an educator at the University of Maryland - College Park, helping college students find their way into their bodies.

Now that the snowflakes are threatening to fly, I can't wait to dive into a new artistic process with MEPC at the same time I dive into a new project with Rebollar Dance. Dance, dance, everywhere! 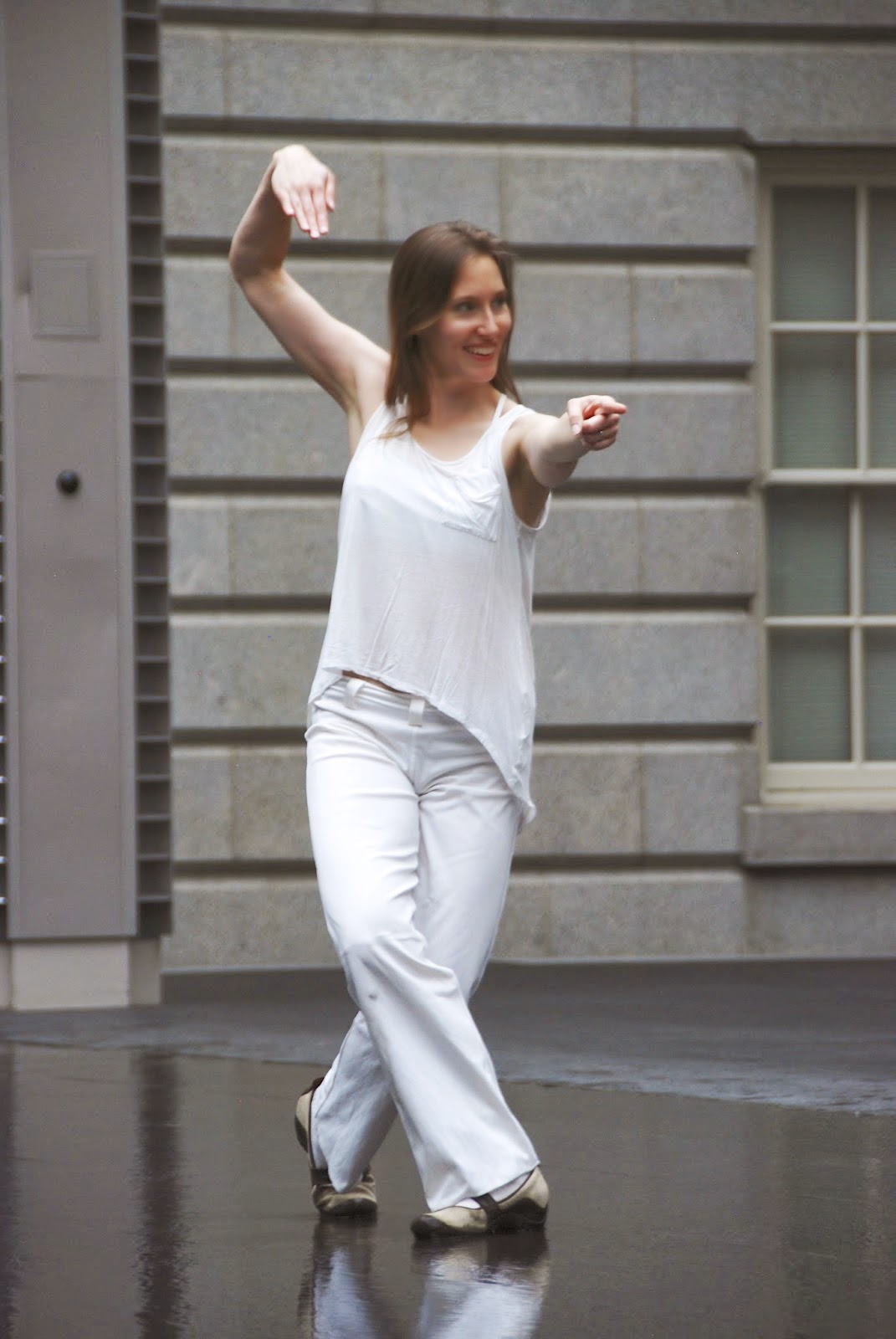 Posted by Finding Dance at 9:32 AM No comments: